There’s a coffee shop in the heart of Mission Valley, between the concrete hulk of Qualcomm Stadium and Sea World on the coast, where some of our most important early conversations about gospelthread went down.

We’d show up at the crack of dawn to find Wes Van Fleet reading his bible like most people eat breakfast—absorbed, grateful, alive to the nourishment on the table.

This is a man who loves the gospel.

You would have to be in love with Jesus to do what Wes has done for us. Back when we still had huge unanswered questions in our business model, he agreed to become our first contributor. He carried gospelthread with him to India earlier this year and asked a native church-planter there if he was interested in contributing. And he has continued to write for us, even in a recent season of intense ministry at his church.

When we asked what motivated him to sign on, he said, “Probably the same thing that made you guys want to start gospelthread. This could be something that any believer could read. It could change lives. Any time I get a chance to share the gospel, especially from the scriptures, I’m going to take it.” 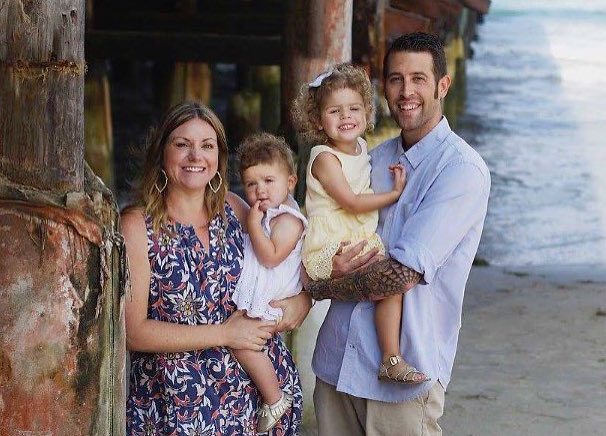 One thing that’s immediately obvious when you meet Wes is the discipline that characterizes his schedule, his fierce devotion to his wife and two daughters, and his posture toward ministry.

For that, he looks back to his time in the Army. He signed up in 2001 and served until 2006. He got out as a squad leader and worked in private contracting for a year, training soldiers for deployment.

Wes recalls a quote that he kept in his binder as a squad leader with 12 soldiers under his command. It went something like this: “’The Army doesn’t need leaders who are shouting commands from the tower, but leaders who are in the trenches, in the rain with their soldiers.’ I took that with me into the ministry, as well.”

Today, Wes is co-pastor of Kaleo Church in El Cajon—an inland suburb of San Diego—overseeing leadership development and discipleship. He has been serving there for four years, beginning as a missional community leader. Most of his commentary writing for gospelthread is distilled from sermons delivered at Kaleo.

“So many are still nominal believers and so enslaved to morality,” Wes says of his longing to see the gospel transform lives. “They’ve been going to church for so long, and don’t understand the freedom that comes with forgiveness and being counted righteous in Christ.”

Being the kind of pastor who doesn’t shout orders from the tower but fights in the trenches is costly, Wes concedes: “When the flesh kicks in, it’s challenging. But at the end of the day, we’ll never out-sacrifice Jesus.”

Honestly, it was more of an introduction to Christ in the Old Testament. I began to take Luke 24 very seriously, and the apostolic preaching of the Old Testament that followed. From there, it was as if the Lord peeled back some layers and I was looking through a Christ-centered kaleidoscope. This resulted in a very strong conviction that all of the Bible is about Christ and the Gospel.

Two people: 1) When I was a new soldier in the US Army, I had a platoon sergeant named Chad Anderson who took me under his wing. Although I was not a Christian, I think God used him to show me what it means to lead by example. I really wanted to imitate his character and his skill-sets. 2) The lead pastor at our church, Tim Cain, has been really influential in my life and ministry training. The way he truly cares for people’s souls is something I have not seen in any other pastor. He is both an amazing preacher and a counselor who always brings the Gospel to apply in every single situation.

Goodness, probably a million different challenges. I am a pretty insecure dude, while simultaneously full of pride. I think the Gospel has continued to humble me when I am proud but also feel accepted and loved when I feel like a failure. To know that Christ is my forgiveness and my righteousness is the sustaining motivation in my ministry.

Probably the imputed righteousness of Christ and the transforming power of the Gospel. The forgiveness of sins that Christ purchased for us at the cross is a beautiful truth, but for years I had missed that he actually counts me perfectly righteous as well (2 Cor. 5:21). This not only frees me from having to perform and earn God’s grace, it is the spark that ignites the passion and desire to wear ourselves out for the One we belong to (Phil. 3:12-16).

I am so thankful for the movement, and have seen so many people come to an orthodox understanding of the Trinity as revealed in Scripture. One thing that is exciting for me personally is witnessing people who have gone to church for 20 years say things like, “I think I may not have been a believer all these years. I think I am seeing Christ for the first time!” after hearing a Gospel-centered sermon. It’s exciting to watch people who once defined Christianity as going to church, listening to Christian songs, and being absolutely adamant about the things they were against (homosexuality, Second Amendment rights, etc.), move to being so satisfied and delighted in the Gospel that they become about Jesus and his glory.